Win up to $1,000 and develop your Service-Learning projects!
The Regional Service-Learning Award calls on all schools and organizations in Albania which have organized activities and projects of Service-Learning and wish to earn financial resources to further develop their projects.

Prices:
*First price: $1,000
*Second price: $750
*Third price: $500
Mary Ward Loreto Foundation is the official partner of the Latin American Center for Service Learning and at the same time the official representative for the selection of applicants for the Regional Service Learning Award.
To learn more, visit the link: http://www.clayss.org.ar/CEE/index.html

Awareness-raising and advocating for the survivors of Human Trafficking.

In early January 2019, Rome Reports ran a feature on the work of RENATE, entitled ‘’Human Trafficking: No law is really on the side of the victim.’’ The feature was screened nationally and internationally via the web, thereby raising awareness about Human Trafficking and ensuring informed action is taken to prevent and combat Human Trafficking.

The interview with Imelda Poole, IBVM, President RENATE Europe, is available at:

The Launching of the Research: Ethics in the Education System in Albania:

MWL Education Project would like to present to you the newly published research work called: Ethics in the Education System in Albania.Thank you to Nora Malaj, Deputy Minister of Education, Zef Preci and the Researchers from ACER, the Coordinator of the project, Gerda Sula and the Board of MWL Education who led this work to its completion. We are grateful to all for such great collaboration throughout this process.

Please click here to read the study report “Ethics in the Education System in Albania”, in English.

Ambassador to the Holy See, H.E. Ms. Sally Axworthy reflects on the work of Sister Imelda Poole, IBVM, President of RENATE Europe, in celebration of International Women’s Day, 8 March, 2017. Sister Imelda Poole heads a network of European religious fighting trafficking and exploitation (RENATE). As such, she is a key ally for the UK’s Prime Minister’s goal of eradicating modern slavery. When she was 13, Imelda spent a week praying that she would never become a nun. But a few years later, she met the sisters from the Institute of the Blessed Virgin Mary (IBVM) and was impressed by their wholesome lives. She, as she puts it, fell in love with Christ, and joined the IBVM.

The IBVM is one of the two orders whose founder is Mary Ward (see Monday’s profile of Jane Livesey). Like the Congregation of Jesus, the IBVM follow the spirituality of Saint Ignatius Loyola, including his Spiritual Exercises which help the individual discern his or her calling in the world. Full feature is available at https://www.gov.uk/government/case-studies/fighting-modern-slavery

RENATE Assembly features on the US Catholic Sisters against Human Trafficking website. 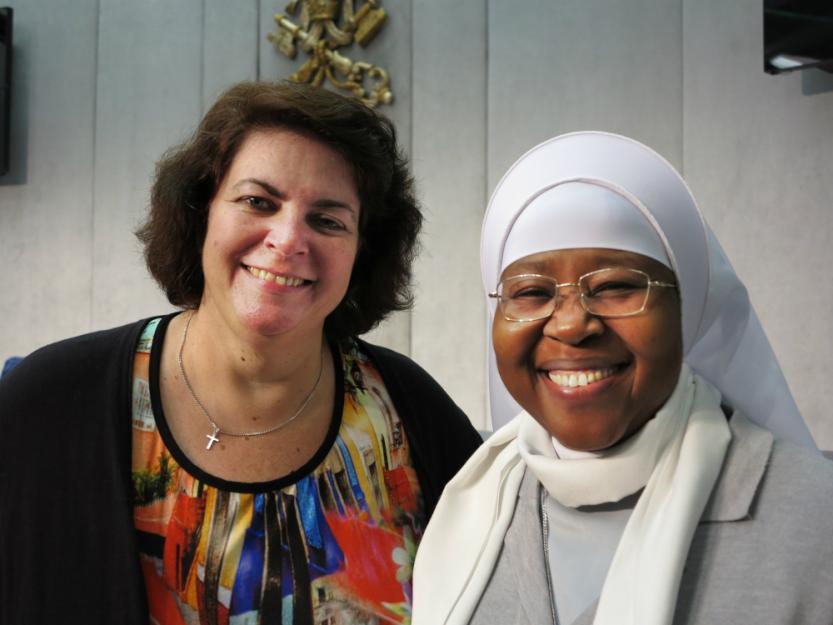 Ivonne van de Kar, an anti-trafficking advocate from the Netherlands, is seen at the Vatican press hall with Sister Monica Chikwe, a member of the Hospitaler Sisters of Mercy, who works with trafficked Nigerian women, Nov. 4. (CNS photo / Carol Glatz)

Women religious are often the first people to discover problems emerging in society because they work directly with so many people in need, an anti-trafficking advocate said.

However, because religious focus more on providing assistance than publicizing their efforts, the rest of the world is often slower to catch on to where there is trouble, said Ivonne van de Kar, the coordinator of the Foundation of Religious Against Trafficking of Women in the Netherlands.

Ending Human Trafficking by 2030: The Role of Global Partnerships:

The Conference, entitled “Ending Human Trafficking by 2030: The Role of Global Partnerships in Eradicating Modern Slavery,” was held at the United Nations Headquarters in New York. Archbishop Bernardito C. Auza, Permanent Observer of the Holy See to the UN, said that the purpose of the event is to “catalyze the coordination necessary to implement Targets 5.2, 8.7 and 16.2 of the Sustainable Development Goals, which commit the United Nations and its Member States to ‘eliminate all forms of violence against all women and girls in the public and private spheres, including trafficking and sexual and other types of exploitation,’ ‘take immediate and effective measures to eradicate forced labor, end modern slavery and human trafficking,’ and ‘end abuse, exploitation, trafficking and all forms of violence against and torture of children’ by 2030.”

Archbishop Auza mentioned that Pope Francis, in his Message for the World Day of Prayer for Peace in 2015, highlight that now is the time for urgent, concerted and coordinated efforts. “We are facing a global phenomenon that exceeds the competence of any one community or country,” the Pope decelerated in the Message. “In order to eliminate it, we need a mobilization comparable in size to that of the phenomenon itself.”

Taken from: Holy See Mission to Host Major Event Against Human Trafficking on April 7 . Click the link for more.

Sr. Imelda Poole, IVBM, President of Religious in Europe Networking Against Trafficking and Exploitation (RENATE) and Mary Ward Loreto Foundation, was part of the second panel that were focused on describing the scope of the triple scourge of human trafficking, modern slavery and forced labor. Below you will find the video to the speech presented by Imelda Poole, IBVM:

To hear all presentations click the following link: http://webtv.un.org/watch/ending-human-trafficking-by-2030-the-role-of-global-partnerships-in-eradicating-modern-slavery/4837421498001

Imelda Poole, IBVM, President of Mary Ward Loreto is featured in this week’s edition of The Global Sister’s Report, a Project of National Catholic Report in the United States of America.

Interviewed by Sarah Mac Donald, a freelance journalist based in Dublin, Ireland, Imelda talks about her work in Albania and the work of the wider network RENATE, during this week which started with the 8th of February, the International Day of Prayer and Awareness against Human Trafficking.